The precincts of Sri Sathya Sai Grama, Muddenahalli was a scene of bustling activity on the December 17, 2017. The divine energy flowing through the congregation of devotees was palpable, for it was a joyous occasion, not just for the devotees, but for a large number of school-going children who were the beneficiaries of Bhagawan’s divine prasadam in the form of wholesome, nutritious breakfast. It was the fifth-year anniversary of the Annapoorna Breakfast Programme, a unique service opportunity envisaged and carried out under the guidance of Bhagawan Sri Sathya Sai Baba. This day also marks the second anniversary of the formation of Annapoorna trust which undertakes the service activities. 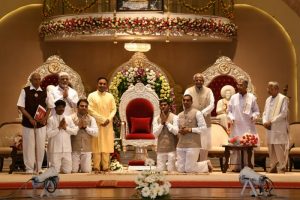 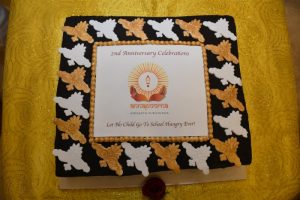 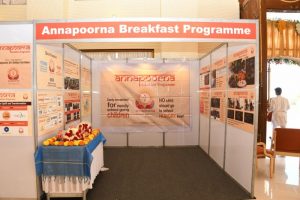 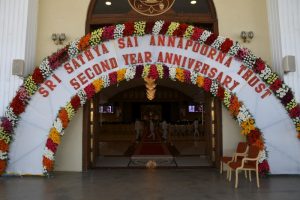 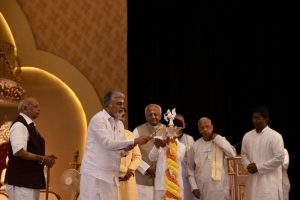 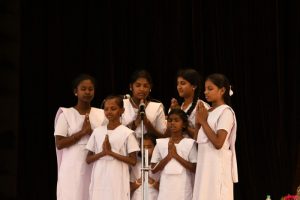 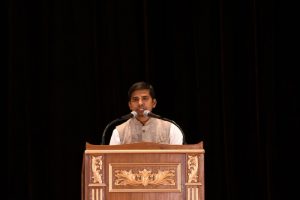 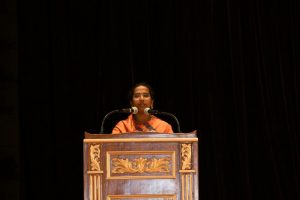 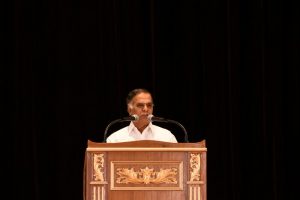 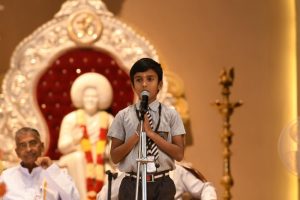 In the year 2012, a band of dedicated volunteers undertook to dedicate six days in a week, cooking and providing nutritious breakfast to 50 school-going children from malnourished backgrounds. From this modest beginning, this service has now expanded across 10 Indian states and one Union territory, involving 1500 volunteers, feeding nutritive breakfast every day to 100,000 children.

The invocation prayer of Lingashtaka Stotram was rendered by a group of children from C V Raman Nagar Sevamrutham group. This was followed by talks by volunteers associated with the service programmes.

Sri Anand Kadali, Secretary and Trustee of the Sri Sathya Sai Annapoorna Trust and one of the pioneers of the Annapoorna Breakfast Programme, spoke about the way in which they were working towards bringing many more children under the ambit of this nutrition scheme. He expressed his gratitude to Bhagawan for conferring on him this opportunity and attributed his success to the grace of the Lord.

Deepak Kumar, a sixth-grade student and a beneficiary of the Annapoorna Breakfast Programme, gave a heart-rending speech about the transformation of himself and his family after being soaked by the love of the volunteers of this programme. He said that he was inspired to serve society in a similar manner after he grows up. Bhagawan then beckoned him and blessed him with a gold chain as a token of his love.

Sri Kamala Kannan (Honorable Minister of Education and Social Welfare, Puducherry) addressed the audience. He confessed that though he was an eloquent speaker otherwise, here at Sathya Sai Grama he is dumb stricken. He attributed this to the sublime and holy vibrations of the place. He also spoke about the outstanding service of the Annapoorna Breakfast Programme in his home state, and assured that his Government is always ready to provide all the support needed for such altruistic activities.

Thereafter a book entitled ‘Process manual’ which delineates the standard operating procedure of the programme, enrolment of various stakeholders, risk and compliance management etc. was released. The updated website of the Sri Sathya Sai Annapoorna trust: https://annapoorna.org.in was also released.

Sri B N Narasimha Murthy, Chief Mentor of Sri Sathya Sai Loka Seva Group of Institutions, said in his speech that, according to Baba, the one-point solution for all the turmoil, conflict and violence in the world, is to provide children with the right kind of education. This could happen only by the joint efforts of the Government, Social welfare organizations and all other stakeholders, including Parents and Academicians. He emphasized that it was the birthright of every child to get equal opportunities in education, nutrition and healthcare, and only this could help in creating an ideal human society.

Post the mangala arathi to Bhagawan Sri Sathya Saibaba, the grand celebration of the fifth-year anniversary of Annapoorna Breakfast Programme came to a close!