When the entire Thiruvananthapuram city lit up in festive fervour on February 20th, the auspicious day of Attukal Pongala to make the annual offering to the deity, Attukal Bhagavathy -the ‘Divine Mother’, Annapoorna volunteers from Kerala sprang in to action by serving the women devotees at the congregation. 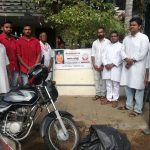 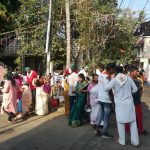 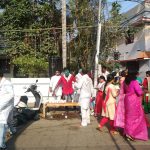 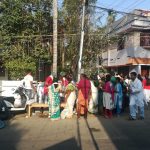 The Attukal Pongala held in Attukal Temple, one of the ancient temples in Thiruvananthapuram, Kerala, is the largest congregation of women for a festival in the world.

Pongala, which means ‘to boil over’, is the ritual in which women prepare sweet pongal and offer it to the Goddess or ‘Attukal Amma’. The ritual can only be performed by women and the number of devotees has increased to the point that it has been recorded in the Guinness World Book of Records. Almost 40 lakh women usually participate in this festival every year.

On the morning, around 900 women devotees who had gathered at Karamana, to offer Pongala to Attukal Devi were served breakfast by a team of seven Annapoorna volunteers from Thiruvananthapuram. Amidst the strict traffic regulations put in place as part of festival arrangements and the scorching heat in the city the breakfast was gladly received by the devotees.

It turned out to be an extremely unique experience this year for the volunteers as they could take part in this festival of social harmony in their own humble way.