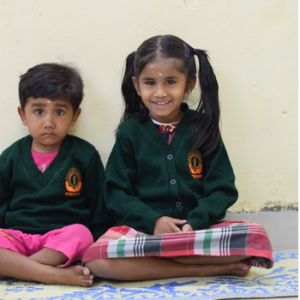 Genuine smiles, hearty laughter and the love we receive from these children is what keeps us going. Knowing that we are making a positive impact in their lives and serving the cause of nation-building inspires us to give our very best each day to each child.

Serve each child from the goodness of your heart. 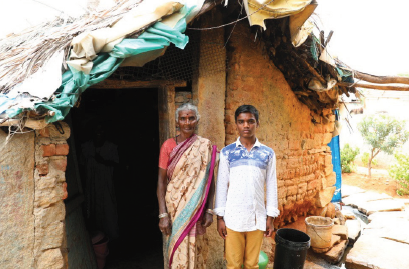 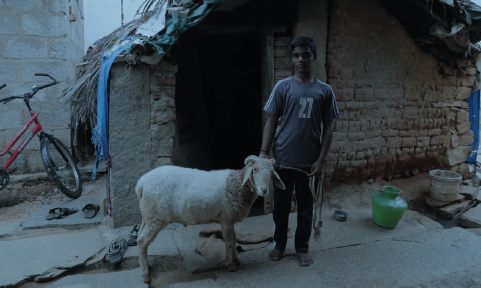 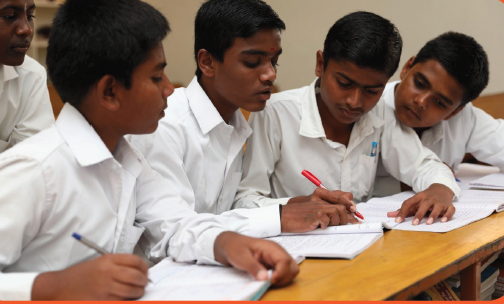 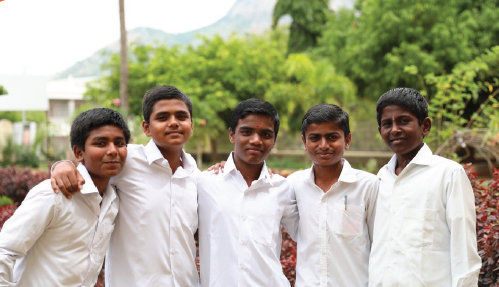 Sugunesh is from Kundavathi village living with his grandmother after the demise of both his parents. He helps his grandmother graze cattle and goes to a government school, living on his grandmother’s meagre income of 500 Rs per month as old age pension from Govt of Karnataka.  He was a topper in his class, class leader and in charge of the library.

Actually, Suganesh never had breakfast until he was 12 years, when his first meal of the day was the midday meal from govt. ‘Let no child go to school hungry ever’, was the vision of the Annapoorna trust. This team started providing free breakfast for needy school going children in 2012. Luckily Suganesh became the beneficiary of this noble initiative when he was studying in 6th and 7th standard. After he started having breakfast his overall health improved.

Suganesh is very good in sports and athletics. He participated in hobli level running competition which was held in Muddenahalli and won second place in the running competition. When he was in Muddenahalli campus for the competition, by looking at the very peaceful and scenic environment he got a thought that he should study in this campus. He participated in taluk level running competition and won the 3rd prize. Headmaster of the government school Latha nurtured his inclination to join MDH by supporting him to write the entrance exam. He showed his commitment by attending tuitions to prepare for MDH entrance exam and finally cleared the exam. Latha spoke to Annapoorna Trust ( www.annapoorna.org.in) for funding the hostel fees and this was subsequently arranged by the Trust.

“Educational expenses are taken care by Each One Educate One Foundation (www. eachoneeducateone.org). The Gift of Education is an initiative by alumni and alumnae of the Sathya Sai Loka Seva Group of Institutions, Muddenahalli.”

After Suganesh cleared the entrance exam, a team of teachers from Muddenahalli visited his house to study the economic conditions of the family. Apparently Anjanamma had sold their much loved buffalo and a sheep to purchase his uniform, trunk and basic necessities to enable him to the hostel. Finally, Suganesh decided to join the Muddenahalli campus for 8th Std. leaving his loving and happy grandmother Anjanamm and a sheep!. There is no end to her happiness because Suganesh is now in the safe hands of Muddenahalli institution who will nurture all his talents.

Now, Suganesh is a happy school going boy who does not have to worry about cattle, instead he has to spend time in studies and playing football and basketball. He is living in a serene environment with best of facilities with his loving brothers. He is studying in the 9th standard at Sathya Sai Loka Seva, Muddenhalli High School in the Kannada medium. 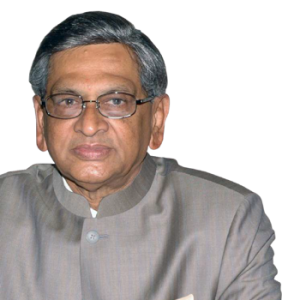 FORMER EXTERNAL AFFAIRS MINISTER, Government of India and former Chief Minister, State of Karnataka (on the sidelines of the One Nation event in Bangalore in August 2016.)

Feeding the next generation of young school-going Indians is now an accepted state policy at the national level. But the importance of providing nutritious food perhaps need to be highlighted more in the policy framework. For instance, while we may serve mid-day meals, it does not necessarily translate into nutrition. I think Annapoorna’s breakfast programme bridges this nutrition gap effectively. 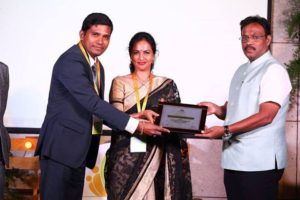 Annapoorna was recently awarded by iVolunteer Overseas after being ranked in the top 7 finalists in the category of “Leader in Volunteer Engagement” for exemplary contribution towards India’s social development. iVolunteer Awards are given to recognise the contributions of the volunteers and organisations who engage with them. We were proud to be a part of this event where the Minister of Education, Youth Affairs, Sports, Minority and Wafk, State of Maharashtra, Mr.Vinod Tawde, felicitated and recognized the representatives from the respective organisations. Both parents are farmers

Before I used to feel tired even though I used to eat something at home before school. But not anymore. I now feel stronger. I love the breakfast they serve. 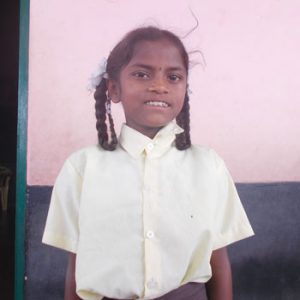 Earlier I used to drink water whenever I felt hungry in the morning and eagerly wait for lunch. But now I don’t. I love the milk and bananas I get every day! 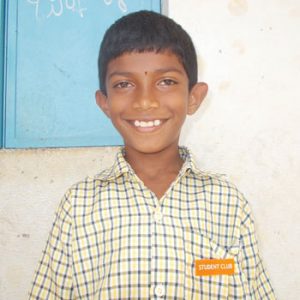 I now enjoy coming to school. Earlier I used to wait for lunch and wasn’t able to concentrate much in class. But now I can focus better and have started loving my time at school 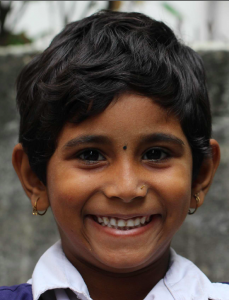 My mother goes to work in three houses. She leaves early in the
morning and hardly stays at home except the night time. My father is a
rickshaw puller. I don’t see them both much.
I have been coming to school since the last two years. Before the
Annapoorna team came, I never got any food till the middle of the day.
But now I get very good food like milk, biscuits, bread, and banana in the
school. I don’t feel hungry and sleepy in class anymore. I study well and
have more energy. My teacher also appreciates me more now. I love my
Annapoorna uncles and aunties, and I know that they love me too. 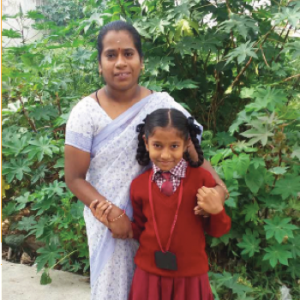 Mother of a child
who receives breakfast at the centre in
Doddabele, near Kengeri, Bangalore, Karnataka

My second daughter, Sanjana, was suffering from severe anaemia. But after she started receiving regular and healthy breakfast in centre, her health has improved a lot. The children are served healthful breakfast every day, with a good mix of fruits, vegetables and milk, rich in protein and vitamins every morning. And if the little children have trouble eating on their own, the volunteers step in, feeding them with their own hands. 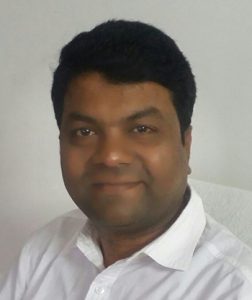 (Development Officer at an Insurance Company)

Every day as a volunteer teaches us many life lessons. While as adults, we are the ones expected to teach these children, more often than not it is they who do. Once a student, who had broken his arm, wasn’t able to feed himself properly during breakfast. I noticed it and started walking towards him to help feed him. But even before I could reach him, another classmate of his came forward and started feeding him. No one had asked this little boy to do it. He did it on his own, out of the goodness of his heart. I was simply transfixed!

These were young children with no proper education, sophistication and exposure. But right there, at that moment, they taught me the value of selfless love and camaraderie. The little boy later came and assured me that he will take care of the other boy for as long as it takes for him to heal fully. 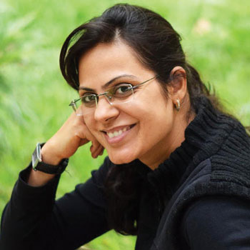 The Annapoorna Breakfast programme has given me a fantastic opportunity to make a meaningful difference to the lives of these children. The shy but friendly smiles, tiny voices praying and singing together, and little hands delicately eating the meal, help to make the entire experience completely joyful and one that I look forward to every week.

Add to that the love and warmth with which new volunteers are welcomed to the group! That would explain why there are often more volunteers than the minimum required number every morning. Also worth mentioning is the flexibility that is extended to aspiring volunteers, making it very easy to become a part of this beautiful activity. 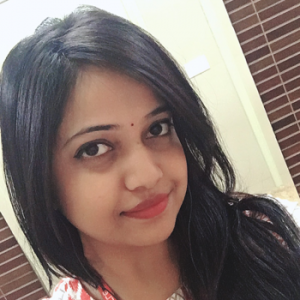 I became aware of Annapoorna during the Oracle Volunteer event. We were interacting with a group of school children in a village on the importance of health and hygiene. But Annapoorna had gone many steps ahead and procured toothbrushes, toothpastes and even set up water filters for the children! Their work in the field of child nutrition is aweinspiring and I hope to continue volunteering with them. Thanks to Annapoorna and my employer, my dream of working for the less-privileged children has come true. 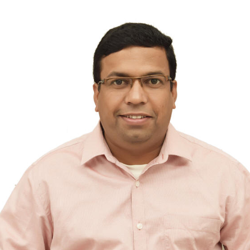 It’s more than a year since I started volunteering here, and I can proudly say that my life’s never been better! Serving hot and healthy breakfast to these less-fortunate school children may seem like an act of giving, but in reality I have received much more from them. Their love and laughter and the satisfaction I have derived from doing the work is totally out of this world.

This work has even helped my family bond better. My children now look forward to participate in the breakfast programme on weekends, and are happier and full of gratitude. They have become more responsible and mindful of how they spend money, as they want to use some of it to serve these children in the schools! 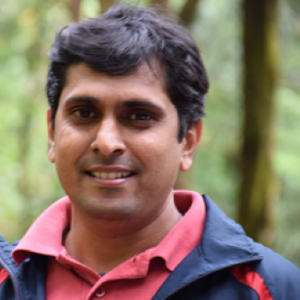 The breakfast programme has transformed the students in more ways than we could ever imagine. One of the Headmasters of a Government school in Chikkaballapur once shared with me that the Annapoorna volunteers had become role models for the students. Some of the students had told him that they wanted to emulate the volunteers when they grow up and serve breakfast to needy students for free! It was both humbling and satisfying to know that we were inspiring the future generation of our country to walk the path of service. 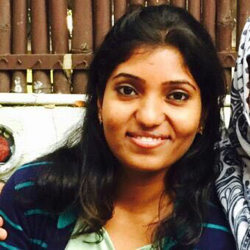 Being a volunteer at Annapoorna has been a very humbling as well as inspiring experience for me. Working at the grassroots level of our society, knowing that what we do is making a difference to many lives is a very gratifying feeling. While the experience in itself is very wholesome, the best reward I get is when after the day’s work, the children break into a spontaneous smiles.

It is also an incredible opportunity to interact and learn from a wide cross-section of people – right from the school children to their teachers, other doctors and most of all the volunteers. 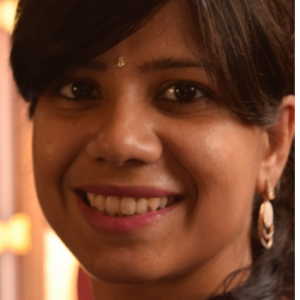 I am always amazed to see children smile and shower us with so much love. I realise that I have received much more than I have given in the entire process. Overall, volunteering with Annapoorna has made me more grateful to the Universe. It has given me a platform to serve the society and pay it forward. 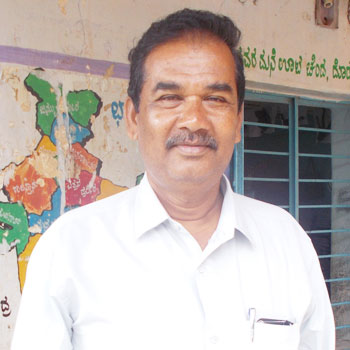 Parents of our most of our school children go off to work early in the morning. This breakfast programme therefore helps these children get motivation along with nutrition for their education. I feel they will also imbibe human values simply by watching this work going on every day. I am sure it will inspire them to serve society in the future when they grow up. 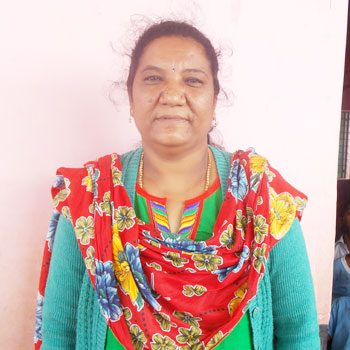 Earlier some of our children would either faint or sit down during morning prayers. But that has completely stopped now. Every day these volunteers come and provide for our children, and it is totally inspiring. I sincerely hope this breakfast initiative reaches schools everywhere. 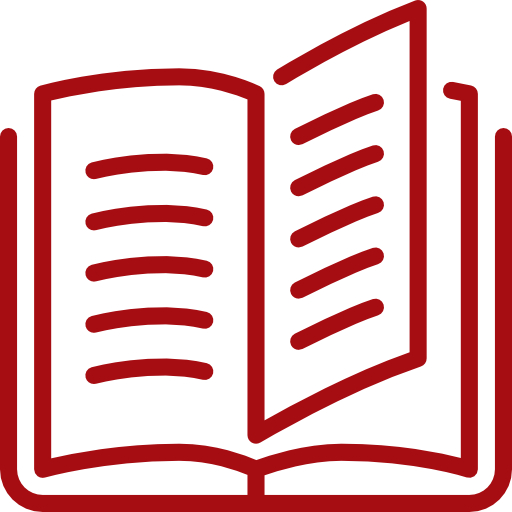 Education should be for life and not just living.

Education should be for life and not just living. We complement the children’s academic curriculum by working with the school authorities and helping them integrate an ethos of human excellence as... 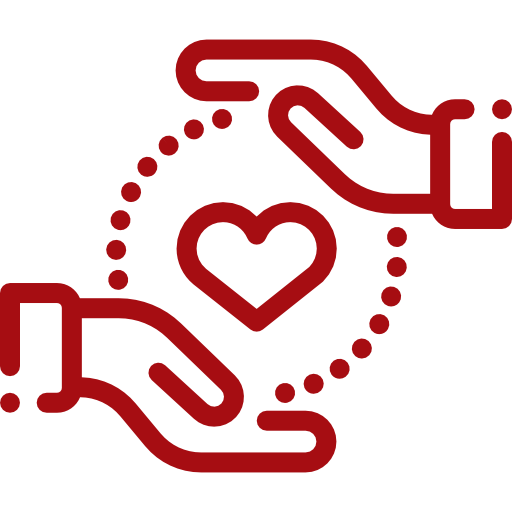 With a focus on the 4Ds in children – Defects, Deficiencies, Diseases and Developmental Delays!

With a focus on the 4Ds in children – Defects, Deficiencies, Diseases and Developmental Delays, our health screening camps contribute to the children’s health through timely detection, prevention, education and medical... 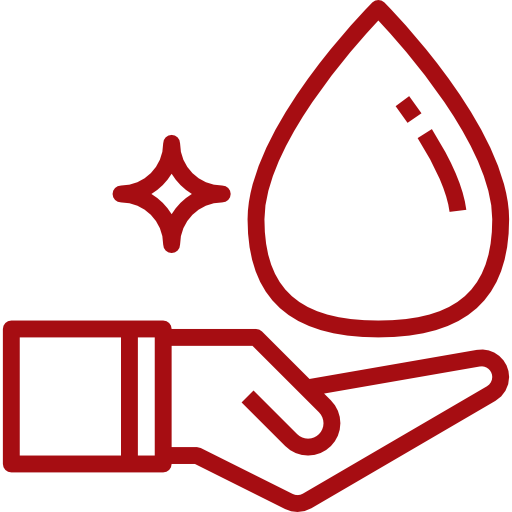 Access to clean drinking water and good sanitation is a basic human right.

Access to clean drinking water and good sanitation is a basic human right. In schools and villages that lack these basic comforts, we execute drinking water projects and construct...