We celebrated the first anniversary of the Trust with our volunteers and school staff in Sathya Sai Grama, Muddenahalli. While the breakfast programme was started in 2012, the Trust had started its formal operations only a year ago. The celebrations were attended by over 160 school staff from 90 schools along with 150 of our volunteers. 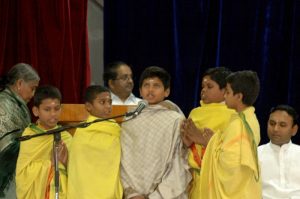 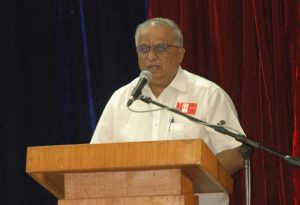 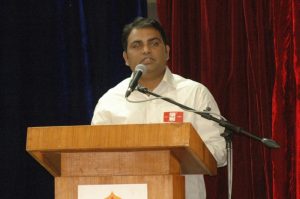 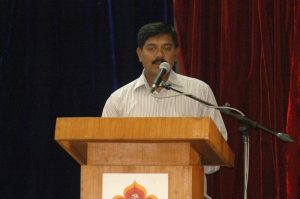 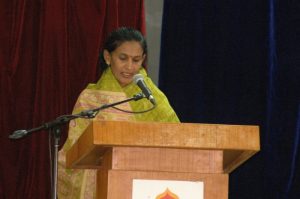 After a few soulful bhajans, the programme commenced with Veda chanting by children from Sangameshwara High School, Byrasandra, Jayanagar in Bangalore, one of the Breakfast Seva centers. This was followed by a brief introduction of the Trust and its journey by the programme comperes.

The audience were then taken on a visual journey, which chronicled the story of how the Trust began, its growth and the lasting impact of the breakfast programme on the school children, their parents, teachers as well as the volunteers through a video documentary, titled ‘Nourishing the Nation through Nutrition’.

The students from the Byrasandra Government School chanted Durga Suktam. This was followed by a brief speech by Sri Jayaprakash Tallam, Trustee, Sri Sathya Sai Annapoorna Trust. Speaking on the sequence of events that led to the birth of the breakfast programme, he confessed that the most notable outcome of the service was the transformation it brought about in the children. Better attendance, enhanced attention span and improved health quotient were some of the positive outcomes, he said. He concluded his talk, thanking all the cooks, Headmasters and volunteers for their contribution to the successful running of the seva initiative and offered his gratitude to Bhagawan for bestowing such an unmatched opportunity for service.

The next speaker was Dr Raghupathi, who offers his medical services for the Healthcare wing. He shared the details of the health and dental camps conducted in the Annapoorna schools by his team. Under the School Health Programme, he said that over 6,000 children have been screen so far with a focus on the 4Ds – Defects, Deficiencies, Diseases and Development Delays. Health kits have been given to all school-children to help them better manage common ailments without missing school, he added. Soon, the team would conduct bi-monthly school visits, wherein even the teachers would be covered, he announced. He also spoke briefly about the SAIWHEELS project, which through a special bus that has been developed to provide free healthcare, education, energy and clean drinking water, caters to around 8 villages near Muddenahalli.

This was followed by a heartfelt speech, capturing the transformation stories of the breakfast initiative by Sri Satyanarayana Kola, a senior executive at an IT MNC and an Annapoorna volunteer. He spoke about how the breakfast programme took off at a Government School in Banaswadi, serving more than 300 children and how it was ably supported by his neighbours as well as the school teachers and Headmaster.

HMs and Cooks – address the gathering

Short speeches in Kannada by the Headmasters of the beneficiary schools followed next. Sri K Gopal Krishna, Headmaster, Government Lower Primary School, Bachahalli, Chikkaballapur District, spoke next. This was followed by a short speech by Sri K N Channabasavaiah, Headmaster, Government Lower Primary School, Gowchenahalli. Both of them spoke about the transformation that the children have undergone since the breakfast programme began. Feeding children who otherwise would have missed breakfast has made a remarkable difference in their overall health quotient, they unanimously agreed. Through this programme, even the teachers have a unique opportunity for their spiritual uplift, they confessed.

Smt. Venkata Lakshmamma, Head Cook, Government Lower Primary School, Kanijenahalli and President of Chikkaballapur District for Karnataka Rajya Akshara Dasoha (Bisi Oota), an association of cooks for government schools was the next speaker of the day. She touched everyone’s hearts with her simplicity as she described how she enjoyed cooking breakfast for all the school children by feeling that she was verily cooking for her own children. She ended her talk by thanking the Annapoorna team for providing nourishment to the school children via the breakfast seva.

Two students spoke next, Kumari Nisarga from Vinayak Nagar and Kumari Chaitra from BGS School Chikkaballapur, who was previously a student at Kandavaara School, spoke next. They explained how the breakfast programme had changed their outlook to academics, human values and God to a thunderous applause by the audience.

Sri B N Narasimha Murthy, Chief Mentor, Sri Sathya Sai Loka Seva Institutions, and Advisor, Sri Sathya Sai Annapoorna Trust spoke next. Congratulating all the teachers, support staff, Annapoorna volunteers and the children who have benefitted from this programme, he urged the audience to participate in selfless service and adopt equanimity in lives. He concluded his talk reminding everyone that to attain the fruit of life the path of service was quintessential and by serving all we would ideally only be serving ourselves and moving closer to God.

After a short lunch break, a medical camp was conducted by the assembled medical staff for all the teachers and the kitchen staff. Health cards were filled up and collected. Booklets on the Annapoorna programme were then distributed to all the attendees.