Case Study: Education Is The Most Powerful Weapon Which You Can Use To Change The World

Sugunesh is from Kundavathi village located at the foot of Nandi hills in Chikkaballapur district of Karnataka State. His mother Gayatri, house wife died due to family conflict when he was just 3 years old. His Father Muniraju who had a bad habit of drinking died when he was 13 years old. He had a very loving sister Supriya who died due to ill health. Despite all these difficulties in the family he continued his studies in the government school. He lived with his maternal grandmother Anjanamma aged 86 years in a small hut in the same village. The family consisted of Sugunesh, Anjanamma and their livestock (two sheep and a buffalo). 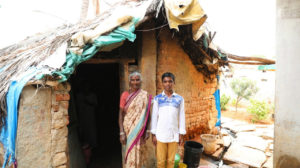 Anjanamma’s only aim was to educate Suganesh in spite of challenging financial condition. Anjanamma is the sole breadwinner of the family. She has been getting Rs. 500 a month as old age pension from government of Karnataka. His family comes under below poverty level, they have been getting free ration from the government. Mohan Babu his uncle, who has been working in a milk dairy is sending vegetables twice a month. Many relatives were living in surrounding villages but none of them were extending helping hands to Suganesh’s family.

In spite of difficult family circumstances and meager income, Anjanamma wanted to educate Suganesh and make sure he will do well in life. Suganesh is very hard working, disciplined and dedicated in going to school. He was inspired by Anjanama’s support. His everyday routine revolved around cattle, government school and Anjanamma. Every morning, he got up at 5:30 AM. Then he went to the field spending time to graze the cattle upto 9:30 AM. Before going to school he was tied the cattle in a place where grazable grass was available in plenty. He went to school without having breakfast. Everyday his first meal of the day was the mid day meal provided by govt. school. After having lunch, he again spent sometime on the field to change the position of the cattle where grass is available in plenty. After school at 4:30 PM, he was again back in the field and at 6:00 PM returned home. After returning home, he used to have tea with his grandmother and then spent sometime in studies. He was a topper in his class and also class leader and in charge of the library.

Actually, Suganesh never had breakfast until he was 12 years, when his first meal of the day was the midday meal from govt. ‘Let no child go to school hungry ever’, was the vision of the Annapoorna trust. This team started providing free breakfast for needy school going children in 2012. Luckily Suganesh became the beneficiary of this noble initiative when he was studying in 6th and 7th standard. After he started having breakfast his overall health improved. 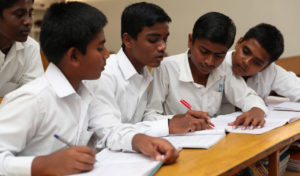 Suganesh is very good in sports and athletics. He participated in hobli level running competition which was held in Muddenahalli and won second place in the running competition. When he was in Muddenahalli campus for the competition, by looking at the very peaceful and scenic environment he got a thought that he should study in this campus. He participated in taluk level running competition and won the 3rd prize. Headmaster of the government school Latha nurtured his inclination to join MDH by supporting him to write the entrance exam. He showed his commitment by attending tuitions to prepare for MDH entrance exam and finally cleared the exam. Latha spoke to Annapoorna Trust ( www.annapoorna.org.in) for funding the hostel fees and this was subsequently arranged by the Trust.

Educational expenses are taken care by Each One Educate One Foundation (www. eachoneeducateone.org). The Gift of Education is an initiative by alumni and alumnae of the Sathya Sai Loka Seva Group of Institutions, Muddenahalli.

After Suganesh cleared the entrance exam, a team of teachers from Muddenahalli visited his house to study the economic conditions of the family. Apparently Anjanamma had sold their much loved buffalo and a sheep to purchase his uniform, trunk and basic necessities to enable him to the hostel. Finally, Suganesh decided to join the Muddenahalli campus for 8th Std. leaving his loving and happy grandmother Anjanamm and a sheep!. There is no end to her happiness because Suganesh is now in the safe hands of Muddenahalli institution who will nurture all his talents. 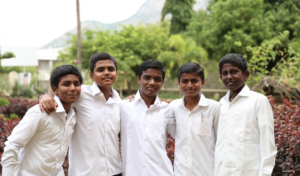 At the same time, Suganesh is completely elated after joining Muddenahalli. He started playing football and basketball and also started participating in Yoga. He is now more service minded and devotional towards god. He participated in state level 600m and 400m running competition. He is a natural leader and has been appointed as room leader and “surroundings cleaning” leader. Overall, he has improved in Maths and English, although earlier he did not know the alphabets of English. Teachers are very happy with his behavior and conduct and his leadership qualities on the campus.

Now, Suganesh is a happy school going boy who does not have to worry about cattle, instead he has to spend time in studies and playing football and basketball. He is living in a serene environment with best of facilities with his loving brothers. He is studying in the 9th standard at Sathya Sai Loka Seva, Muddenhalli High School in the Kannada medium.