To address malnutrition, flavoured milk to be served to students in Karnataka

Adamya Chetana Trust that is part of initiative has provided mid-day meals to schools in Karnataka since 2003 and is run by Tejaswini Ananth Kumar, wife of late BJP MP Ananth Kumar.

Around 3 lakh students in Karnataka’s government and government-aided schools will now receive a flavoured milk-based health drink twice a week in a bid to address malnutrition in the state. This is after the Sri Sathya Sai Annapoorna Trust along with Adamya Chetana Trust introduced the ‘Sai Sure Multivitamin Micronutrition Powder’, which will be mixed with milk provided to students up to Class 10. The flavoured milk will be given twice a week under the Ksheera Bhagya scheme.

Ksheera Bhagya is the government programme under which milk is provided to students studying in government-aided schools and Anganwadi centres. It was started in 2013 by the Siddaramaiah-led Congress government

The latest initiative was launched at the Adamya Chetana in Gavipuram, Guttahalli in Bengaluru by state Education Minister Suresh Kumar on September 12th, 2019. 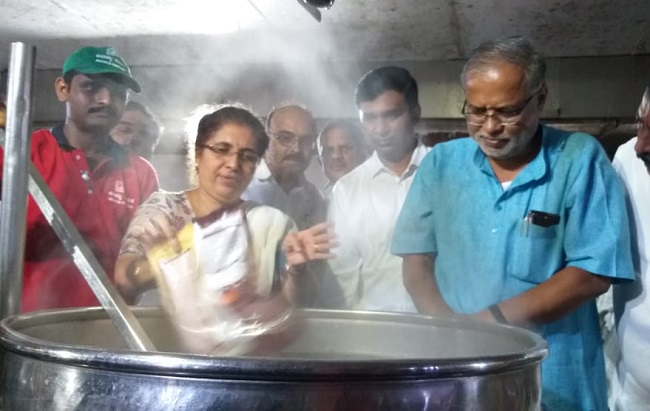 The mix is being introduced to the diet of 2 lakh students and the people behind the initiative say it is aimed at addressing malnutrition. “Children come to school on an empty stomach and wait for mid-day meals. They can’t study well unless breakfast is provided and since many parents need to go early for work, children do not have breakfast. Our volunteers’ goal was to attend to the needs of those children,” explains Anand Kumar, General Secretary of Sri Sathya Sai Annapoorna Trust.

The trust approached the Adamya Chetana Trust after implementing the mix in a pilot test earlier this year. Both organisations have now received the permission from the Karnataka government to launch the initiative to introduce the mix in the diet of over 3 lakh school children. Adamya Chetana has provided mid-day meals to schools in Karnataka since 2003. It is run by Tejaswini Ananth Kumar, wife of late BJP MP Ananth Kumar. The approval for the implementation was given by the BJP government which came to power in Karnataka in July. Adamya Chethana has provided mid-day meals in Karnataka’s government schools since 2003.

The mix comes in two flavours – almond and chocolate – and has been created for the age group of 3-16 years. The scheme was earlier introduced in several parts of Chikkaballapura, Bengaluru Rural, Mandya, Vijayapura, Dakshina Kannada and Uttara Kannada districts.

The mix has been approved by the Food Safety and Standards Authority of India (FSSAI) and is already in use in 15 other states. “We have seen children coming on time and higher attendance due to this. This can only improve academic performance,” Anand adds. The trust also prepares cooked breakfast in over 200 schools in the state in and around Bengaluru.

The initiative comes at a time worrying levels of malnutrition and anaemia were reported in Karnataka. The percentage of women aged 15 – 49 who are anemic in Karnataka is 44.8% and of children aged 6 -59 months is 60.9% according to a release by the Ministry of Health and Family Welfare.